Arkaroola Wilderness Sanctuary – what, where, and why do I need to visit?


What is the Arkaroola Wilderness Sanctuary?
In the Dreamtime, a great snake named Arkaroo lived in South Australia’s Flinders Ranges, in the area now known as the Arkaroola Wilderness Sanctuary. Arkaroo was known for his huge thirst. One particularly bad day, he drank all the water in South Australia’s Lake Frome – a 2600 square kilometre salt lake located East of the Flinders Ranges. Bloated with water, Arkaroo carved a trench as he headed back towards the Ranges. The trench is now known as Arkaroola Creek. As he travelled across the landscape, Arkaroo urinated, forming waterholes in the Ranges. Once in the Ranges, the salt water in his belly had Arkaroo writhing in pain. Those movements form the earth tremors that still shake the Flinders Ranges to this day.
Arkaroola Creek runs through the centre of the Arkaroola Wilderness Sanctuary. The Sanctuary is 610 square kilometres of freehold and pastoral lease located in the Northern Flinders Ranges.

The first European to visit the region was Edward John Eyre. The son of a Yorkshire preacherman, Eyre spent most of his twenties exploring what is now South Australia and the Nullarbor.

Explorers and prospectors followed in Eyre’s footsteps, searching for gold. However, they found only limited supplies of copper, and sapphires, rubies and ‘oriental emeralds’. The gems were not considered to be of a particularly good quality.
In 1910, the discovery of radium ore near Mt. Painter also promised a ‘boom’ that never eventuated. A young (later Sir) Douglas Mawson was responsible for identifying the uranium minerals. The ore was transported using camels, but mining was very limited. Mining in general was considered unprofitable.
Geologist Reginald Sprigg purchased the pastoral lease in 1968. Reg and his family – wife, Griselda, and children Doug and Margaret – established the wilderness sanctuary. Eleven years later, the World Wildlife Fund named Reg a trustee of the Fund for his work in protecting the yellow footed rock wallaby. That work continues today, with the yellow footed rock wallaby frequently seen around Arkaroola and the Flinders Ranges.

The Arkaroola Wilderness Sanctuary is on the North Eastern edge of South Australia’s Flinders Ranges, 700 kilometres North of Adelaide or 200 kms North of Wilpena Pound.

How do I get there?

Visitors have a couple of options to visit the Arkaroola Wilderness Sanctuary.

One option is to drive.

We recommend taking a flightseeing day tour, from Rawnsley Park Station (located on the South side of Wilpena Pound, in the heart of the Flinders Ranges).
Departing from Rawnsley Park Station, guests will see Wilpena Pound at sunrise. The early morning flight travels direct from Wilpena Pound to Arkaroola’s airstrip. On arrival at the Arkaroola airstrip, guests transfer to a vehicle to drive the last few kilometres into the Sanctuary.
There is time for a quick cuppa, and a wee break. Guests then board an open top 4WD for Arkaroola’s signature experience – the Arkaroola Ridgetop Tour. Local guides provide a fascinating insight into the area – giving details of the geology, flora and fauna that can be seen. Parts of the track are so steep that only Arkaroola’s skilled guides are permitted to drive it.
This half day tour includes morning tea. The morning tea stop is enjoyed while guests contemplate views of the oldest granite in the Flinders Ranges.
The Ridgetop Tour will return to Arkaroola Village in time for lunch (included as part of Chinta Air’s flight-seeing package).
After lunch, guests re-board the aircraft for a leisurely flight over Blinman, and the Heysen Range. Artist Hans Heysen described the Heysen Range as “the bones of the Earth, laid bare”. The flight continues over Wilpena Pound and lands back at Rawnsley Park Station.
Every passenger gets a window seat, to experience the best possible views of the passing scenery. 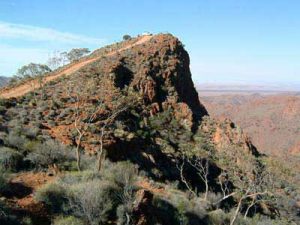 The Arkaroola Adventure departs from Rawnsley Park Station with a minimum of two people.