Kati Thanda / Lake Eyre – what, where, and why do I need to visit? 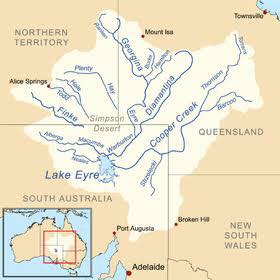 As a result, heavy rain that falls in Western Queensland will end up in the lake. Any rain must soak into the dry ground before there is enough excess to run off into the creeks and rivers. Consequentially, not every rain event in the catchment results in water in Kati Thanda / Lake Eyre. Sadly, any water that makes it to the lake evaporates.
When dry, the lake bed is glistening white salt. This can be broken up by patches of red dust, shades of grey where there is moisture, or areas of pink bacteria. When it has rained, there can be anything from shallow puddles of water that reflect the sky, to having a surface resembling the ocean. Water is present somewhere in the lake approximately every eight years. However, the lake has only filled completely three times in the past 160 years (the last time was 1974).
The shoreline varies from unremarkable sloping beaches to low cliffs and breakaways.
Belt Bay, in the South Western corner of Lake Eyre North, is 15.2 metres below sea level. This makes the lowest point in Australia.
On an area of Lake Eyre North known as Madigan’s Gulf is the area where Donald Campbell set the land speed record. Campbell originally planned to race his purpose built car in 1962, but rainfall rendered the salt lake unuseable. When he returned in 1964, the surface was still damp. Campbell was disappointed with the final speed of 403.10 mph (648.73 km/h). He had been hoping that the vehicle would fulfill it’s promise of 800 km / h.

Where is Kati Thanda / Lake Eyre?

How do I get there? 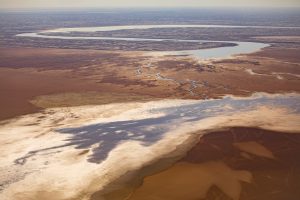 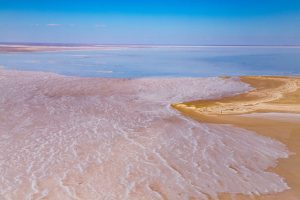 Water in Kati Thanda -Lake Eyre in 2019, seen from a scenic flight.

Water in Kati Thanda – Lake Eyre in 2019, seen from a light aircraft .

Please click on the link for details of all Kati Thanda / Lake Eyre scenic flights departing from Rawnsley Park Station in the Flinders Ranges.

Please click on the link for details of all Kati Thanda / Lake Eyre scenic flights departing from Ceduna.

What else is there to see and do?

Dine at one of the country pubs in the area. Whether you dine at the William Creek Hotel, the Birdsville Hotel, the Mungerannie Hotel, or the Marree Hotel, they can serve a steak or a burger that will knock your socks off.
If you wish to customise your trip in any way, please let us know this at the time of booking so we can tailor make an experience for you.

When there is significant amount of water on the Lake, there is plenty of birdlife, including pelicans.
The Lake was last considered to be in flood in 1974. Pelicans that were seen and banded on the Lake then were later tracked to Christmas Island, New Zealand, and Palau (East of the Phillippines).